Hello world! As they say in programming spheres. This is my first in the new format and back at WordPress – didn’t like Blogger that much. I’m here to recount my experience cycling across England – despite a fairly narrow choice of crossing it’s still 150 miles.

The day was organised by Open Cycling. Fully fed, signposted, mechanic support and everything you’d need. They also carry your belongings so you only need yourself, the bike, and something to keep you fueled between feed stops.

I cycled with Micky and Tim, friends I’d made cycling across vertically. Graeme was also riding but it soon became clear he wasn’t going to be able to keep up due to an injury. The start line was Seascale, a small collection of B&Bs on the most western coast of Cumbria. We arrived the day before in order to leave at around 5am. 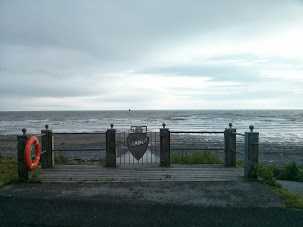 When 5am arrived we coasted down to the coast to begin. The full ride was broken into 5 segments. On paper the first was the most oppressive, around 40 miles and starting off with the mighty Hardknott Pass and Wrynose Pass. The descent from these monsters was almost as challenging as the ascent. It was the first time I’d smelled my brakes burning.

From there we crossed Windermere and ploughed onwards to the coast at Whitby. Most of the miles outside the Lake District were very similar. There wasn’t much more to think about other than continuing on. In contrast I will definitely return to ride around the lakes – Fred Whitton Challenge anyone?

The last part of the ride through the Yorkshire Moors was undoubtedly more suffering than the supposedly toughest climbs which started the day. I lost count of how many rolling 18~25% hills I had to climb. Remember by this time there are already around 130 miles weighing down on the legs. Nevertheless we pressed on, waiting for each other at the crest of each climb.

We completed the ride together in just under 12 hours. Minus the ferry crossing roughly 11 hours and 50 minutes. Here is a picture of a weather beaten freak with his medal. 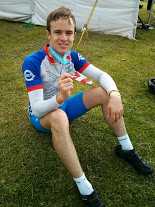 So that was it really! From there we hopped on a train and went ho….. oh wait. Sorry, I forgot about the turning round and cycling back again bit.

Yep that’s right, we got up in the morning – myself, Tim and Micky – and got back on the bikes, and started off the same direction we came.

This was tough. Just getting out of the moors was hard enough. But this time the wind was most definitely against us. There was a point where we had to pedal down a fairly steep hill. The miles were relentless and slow, and began to get tedious. In the end after just – just! – 113 miles we reached Kendal and called it quits. 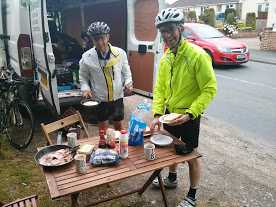 We had our very own support van in the form of Val – one of Micky’s work colleagues. This provided us a much needed bacon butty and coffee injection around half way through. From Kendal we were picked up with our bikes and driven the rest of the way to Seascale – taking the A590 of course – as we already had rooms booked from where we stayed the previous day.

That evening we scoffed a fantastic roast dinner and gorged on beer. There was certainly some relief looking out the window that we hadn’t bothered to continue our ride. Waves crashed up the cliffs and wind and rain battered the windows, it was particularly grey and uninviting.

I must recommend the B&B I stayed at for anyone who find themselves out there. I mean you must either be very lost, work at Sellafield or be taking part in this event so you’re always going to want to stay somewhere nice. Check out http://westcliffhotel.net/ – ignore the picture.

Almost forgot! Don’t forget to check out both rides on Strava: